As many of you know, I am a creature of simple pleasures. My days, other than those of late (which sadly have been filled with semi blindness and constant migraines) are filled with poo-picking chickens, chatting to myself in the garden and writing – albeit, most days, mainly nonsense.

These simple things please, entertain, and basically keep me happy and grounded. However, I do have to admit that I have recently found these pleasures challenging. All of them . . .

Chea has decided to use the onion bed (beautifully raked and as fine as sand) for a giant litter tray. This doesn’t worry me too much as I don’t really eat onions. I grow them for Richard.

The first morning after planting I wandered out to find two onions dug up, four little saucer-shaped indents and a heap of soil. At least she had the good grace to cover it up. The second morning I wandered out to find three onions dug up, five little saucer-shaped indents and two heaps of soil. On both occasions I swore, threatened to send her back to the RSPCA and re planted the onions.

I took great delight in finding a lovely variety of runner bean in the week. I rushed them home and planted them up into larger pots immediately. Two nights later a frost settled over the garden, crept into the greenhouse and killed them stone dead. It also took out the tomato plants. I was not happy and even breathed warm breath on their little shrivelled leaves in the hope that I could resurrect them. No good. I think they are goners.

And re the writing? Well, I haven’t done any. I’ve been waiting for the Bucket Head paperback to show up. There was a technical hitch –  and you all know how I am with technology, let alone hitches. It’s available in my shop.  http://readaloudstorybooks.com/books/ I mentioned last time that I was going to tell you how Bucket Head came about.

One Saturday, when the grandchildren were here we decided to make a scarecrow. It all went swimmingly well until we came to his head. We turned the potting shed upside down but we couldn’t find anything suitable . . .and then we found a bucket. So we used that. And Bucket Head the scarecrow was born.

I won’t bore you with the details but if you know me, and many of you do now, you will know that messing-up an order is pretty normal for me. And why shouldn’t it be I cry in my own defence. A few years ago I was a total ‘newbie’ cautiously dipping my big toe in waters new. I’d just about worked my way around Word and how to ‘double space’ and ‘find and replace’ and then I had to apply myself to ‘uploads’ and ‘downloads’ and Twitter and Facebook and losing whole posts and blogs into the ether. The road has been long and the journey fraught but . . . I am still here, on the other side. Admittedly it has driven me to sitting in a darkened room, counting flies and/or taking long walks out into the garden to ‘calm down’ before I threw the laptop and anything else within reach through the window but hey-ho that’s internet/self-publishing life!

‘What?’ he shouted back.

‘Did you hear me,’ I also shouted back.

‘No, not until the third time.’

‘So how did you know I’d shouted you three times if you didn’t hear me?’

This is what I have to put up with.

Anyway I have digressed massively. What I meant to say is . . . my new children’s book, “Bucket Head,” is now trickling into outlets everywhere. It isn’t on Amazon yet because I also messed that up, but it will be shortly.

I’d love for you to take a quick look.  I’m a tad nervous about this one because it’s the first time I’ve attempted my own illustrations. It was something that I enjoyed immensely, which surprised me somewhat, and if my retinal migraine allows it I’d like to ‘do’ a second Bucket Head book, but as I said before, baby steps and all things in moderation, which, frankly, means that I should bugger off now and stop peering at this screen . . . so I will, and next time I’ll tell you how Bucket Head came to be.

I haven’t blogged/posted/or pretty much anything else since middle January.

For those of you who read this blog, or vaguely keep up with my antics, you will know that back in January I was over taken, or taken over, by serious sessions of vision loss and migraines. These resulted in medication and arguments with the entire medical profession, which, in turn, resulted with me being whisked into A and E, where we spent 13 hours one Saturday morning in February.

Richard was his usual helpful self. After being instructed to call an ambulance immediately after I almost nosed-dived onto the kitchen floor, he said, ‘Do you really want an ambulance pulling up at the front of the house?’

I couldn’t follow his reasoning, but then what’s new. Not being able to stand, or see clearly, I didn’t argue against this comment. See? That’s how ill I was! ‘I’d much rather take you in the car,’ he said. So he did.

I had bloods taken – normal. I had a brain scan – normal. I know, bloody amazing hey? We left around 11.00 pm that night. They gave me a choice of staying in overnight or coming back the following day to see a neurologist. I went home.

Mustering up a fair degree of excitement we toddled back to A and E the following morning to see the neurologist. Great. Now something would be done. Wrong.

Well, my dears, I might have been half-blind, with a pain to my eye socket like someone had plunged a knife into it, but I wasn’t having that. If I could turn up so could he. Without the likes of me he wouldn’t even have a job!

I’ll cut to the chase. He DID turn up (with a hugely grumpy expression on his face, clutching his stethoscope like a comfort blanket) and said something along the lines of, ‘I’m sure you have migraine, I don’t need to examine you, but I will.’

I said something along the lines of, ‘Well don’t bother then!’

Perish the thought that he should earn his keep. Perhaps I’m being hard but bear in mind I was very ill and we had spent almost 20 hours in A and E over the two days. Where, by the way, it transpired that we both picked up a dreadful virus that flattened us both for a fortnight!

Grumpy’s decision? Migraine. Normal migraine and retinal migraine. Lucky me –  two for the price of one. It’s the retinal migraine that causes me to lose my vision in my right eye up to four times a day – 5 days out of 7.

This continued (for 10 weeks) until recently. I have JUST managed 21 days without visual disturbance. I know it hasn’t miraculously gone away and I am sure it will return, but 21 days is terrific . . . truly.

I couldn’t look at the PC or the TV. Or go from one room into the other where light patterns changed. I still can’t cope with the sun without shades, or drive the car, or watch too much TV, or scroll on the PC. My eyes can’t keep up with the movement.

So, I’m being good, reminding myself constantly that small measures and short moments doing these things that I love will have to do – for now. I’m still half brain-dead from the medication but this is one of the crosses that I have to bear.

I’m going to end now because, believe it or not, I shy away from  posts/blogs etc. where they bleat on about pain in the big toe and boils on the bum but I merely wanted to put in an appearance and let you know that, hopefully, I’m back.

I do have a couple of things to tell you next time but for now it’s enough . . . for both of us! 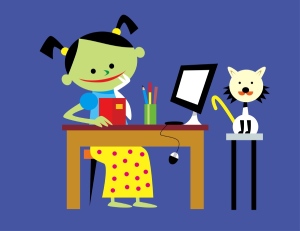 Two Chucks and a Tabby Cat

WITCH EVER WAY YOU LOOK AT IT